As usual, with the spring market comes a fluster of buyers in the market, but much to their surprise this year — very little inventory. This lack of inventory is restricting the amount of homes being sold and driving up prices.

These charts clearly show how the market across the entire Bright footprint is starting to resemble the bubble we experienced from 2002-2006: 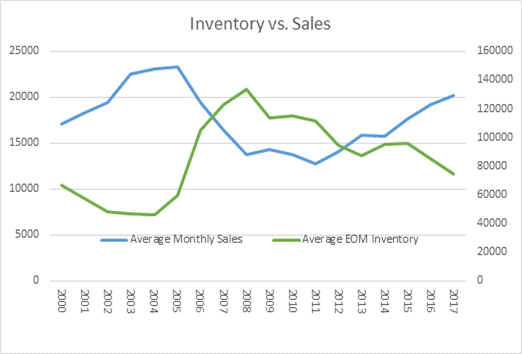 As you can see, from the first chart, the Average End of Month Inventory (green line) was very low from 2000 to 2005. This was the housing bubble of the early 2000s – buyers were taking advantage of record-low mortgage interest rates, and buying. That accounts for the high Average Monthly Sales (the blue line in both charts) as well as the increase in the Average Monthly Price (the orange line in the second chart). From 2007 to about 2012-2013 the market adjusted. But since about 2012-2013, monthly sales and inventory numbers have flipped and diverged again.  The trend is once again showing a similar pattern as we witnessed back in the early 2000s – lower inventory and higher sales, a sellers’ market. One difference is that the average prices (the red line in the second chart) haven’t dropped back to what they were in the early 2000s. It’s been relatively stable since 2013.

Call me for statistics in your current or prospective neighborhoods!